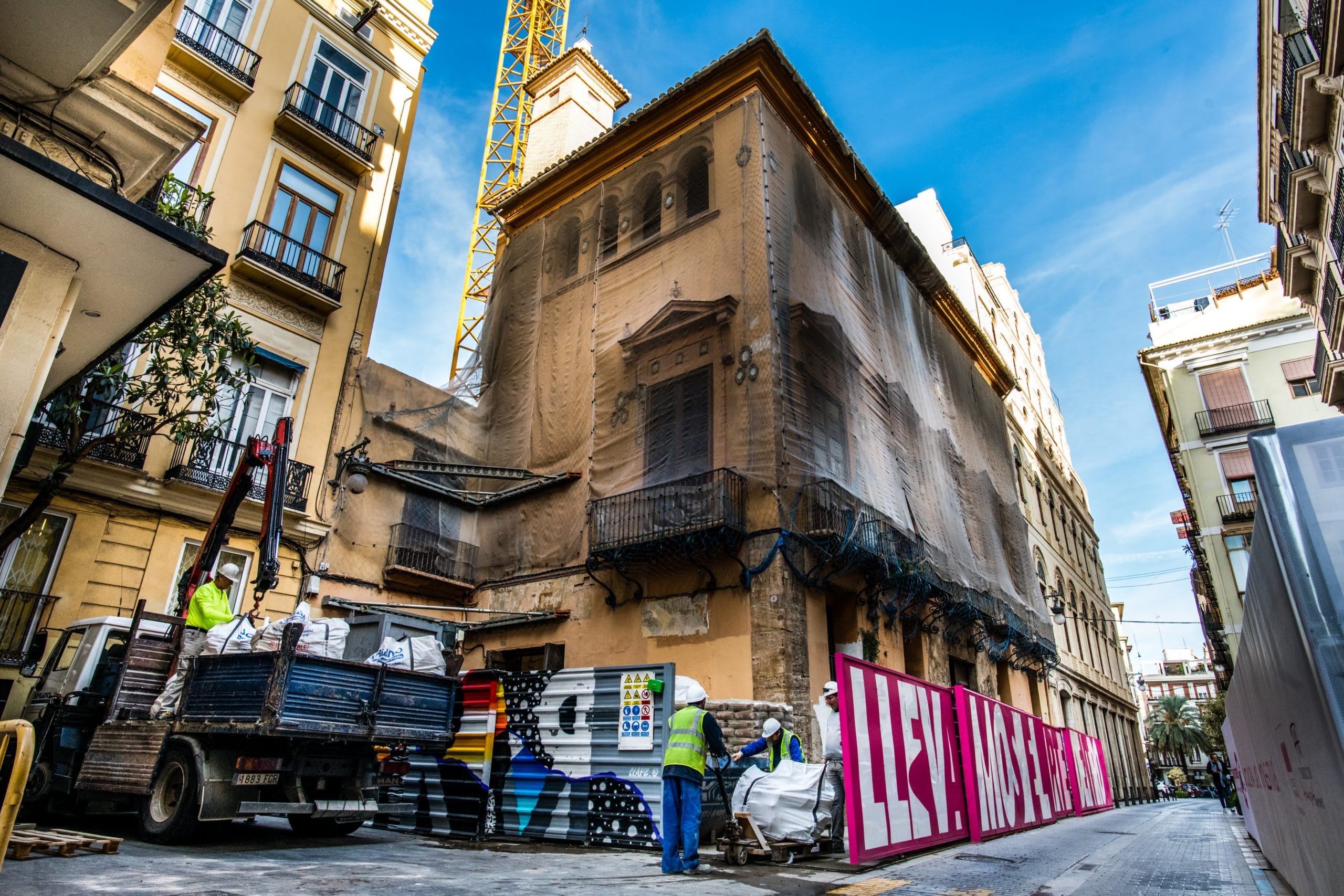 The structural intervention of the Palacio Valeriola begins

The renovation of what will be the future Hortensia Herrero Art Centre hit a milestone. After several months of preparatory Work in the interior, today works have started in the Valeriola Palace, with a façade on Calle del Mar.

The group of buildings that make up the Valeriola Palace have been undergoing a comprehensive renovation process for over a year now, with the objective of saving and securing the structure, recovering its heritage value, and adapting it to a new cultural use that prolongs its existence and its history.

This new intervention in the building located next to Calle del Mar will focus on two aspects. In the first place, preparatory works will be carried out for the consolidation, adaptation and repair of the existing elements of patrimonial value. To this end, a structural intervention will be done in the Valeriola Palace itself, through actions on the original wooden structural beams, as well as on other existing elements. In turn, in the building on Calle San Cristóbal, a construction of three floors will be build, preserving the protected facade and incorporating it into the new project, respecting its morphology.

The renovation and transformation work is being carried out by the Valencian firm ERRE arquitectura  and the intervention will continue until 2023, when the city of València is expected to start enjoying this new cultural space.

Important discoveries to date
In these first months of work inside the Valeriola Palace, important archaeological discoveries were made. In addition to part of the old Roman Circus of the city of València, whose ruins were found during the first works carried out, the ruins of the old Jewish quarter, whose boundary was inside the palace, are coming to light.

In this sense, a traditional oven has been discovered with an important historical and architectural value that could belong to the Jewish quarter and therefore could date back to the 14th century. According to Tina Herreros, archaeologist of the Hortensia Herrero Art Centre Work team, “the current hypothesis, based on the recovered ceramic material and the stratigraphy, is that it is a late medieval furnace.”

In addition, a 14th-15th century jar has been found in a cellar of one of the rooms of the palace. According to the archaeologist “this utensil was embedded in the ground and was normally used as a silo to store food, possibly grain.”

The Valeriola Palace is a neoclassical building located on Calle del Mar that was built in the early 17th century on the remains of the old Jewish quarter of Valencia. The integral intervention in the building plans to provide the art space with a constructed area of ​​more than 3,500 square meters to be used for its activities.

This centre will host both the private art collection of Ms. Hortensia Herrero and temporary exhibitions by artists of recognized national and international prestige. In addition, it will provide a wide cultural offer, as well as conferences and various activities promoted by the Hortensia Herrero Foundation.

With this new infrastructure, the city of València will enjoy a new space dedicated to contemporary art, thus being an addition to the trend of other European cities that have both public museums and private foundations supported by many different patrons.