The Hortensia Herrero Foundation is preparing an immersive art installation by the Israeli designer and architect Ron Arad that will open its doors on 4 June at the Marina de València. Ron Arad 720° is a concept that unites art and technology through a monumental structure called Curtain Call, which will house projections by prominent artists including Mat Collishaw and Greenaway & Greenaway.

The piece, designed by Ron Arad, is in the form of a circular eight-metre-high curtain. Made up of 5,600 silicon rods suspended from a 18-metre diameter ring, it allows images to be projected and viewed from both inside and outside the ring. The result is a 360-degree multi-sensory and immersive experience where the audience both creates and observes the artwork.

With the opening of this immersive art installation in Valencia, Hortensia Herrero, the driving force behind the exhibition, aims to “bring art to Valencians and visitors to the city, as we have always tried to do. After three sculpture exhibitions at the Ciutat de les Arts i les Ciències, last year we switched to a new concept with Julian Opie, where we mixed sculpture, drawing and audiovisuals. This time, with this structure by Ron Arad, we go one step further with a purely audio-visual experience that will envelop the viewer and make them part of the work itself. We hope they will enjoy it and that the surroundings of La Marina will become a place of pilgrimage and a cultural reference in Valencia during the months that it is on”.

Originally created for the Roundhouse in London – a former railway engine shed converted into a performing arts venue – and after visiting Jerusalem and Singapore, the Hortensia Herrero Foundation brings this installation to La Marina, which will remain open to the public until 28 August. Ron Arad 720° is part of the official programme of World Design Capital Valencia 2022. Entry to the immersive exhibition will be free of charge and the projection schedule will be from Monday to Sunday from 22:00 to 01:00 (6 screenings, every half hour). 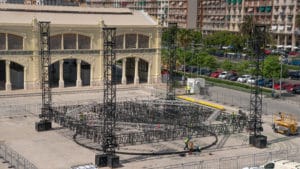 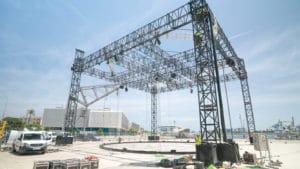 Ron Arad is a renowned designer and architect born in Tel Aviv in 1951. After attending the Academy of Fine Arts in Jerusalem, he moved to England where he studied architecture. He rose to prominence in the 1980s when, while searching for ironwork for a sculpture, he discovered the seats from a Rover car and turned them into the first recycled armchair, the iconic Rover chair. This serendipitous find was the beginning of a trajectory that has seen him become one of the most famous designers on the planet.

In 1989, he founded his own studio together with Caroline Thorman and, a few years later, presented the flexible Bookworm bookcase, one of his best-known pieces that is now produced on a commercial scale by Kartell. He has been head of the Design Department at the prestigious Royal College of Art in London and a professor at the Hochschule in Vienna. In 2011 he was awarded the medal for excellence in design at London Design Week and in 2013 he was elected an Honorary Academician at the Royal Academy of Arts in London.

He has exhibited in museums such as MOMA in New York and the Centre Pompidou in Paris, as well as designing pieces for firms such as VITRA, Kartell, Moroso, Driade, Fiam, Alessi, Cappellini, WMF, Magis and Cassine. 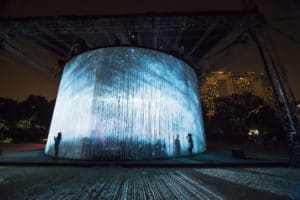